Your guy is ready to pop the question but isn't sure what kind of ring or how much he should spend....when I asked my wife I had always heard that you save three months rent and I honestly thought, sure, that makes sense. Looking back why did I think that makes sense, why not one month rent? why not six months? Three months is a strange number, well the history of why is actually super interesting.

The three-month rule stems from a marketing campaign the De Beers diamond company ran in the 1930s that sold the idea that true love and commitment could only be shown if a man spent a month's salary on his wife's ring and over time it evolved into two in the 80's and finally three months. 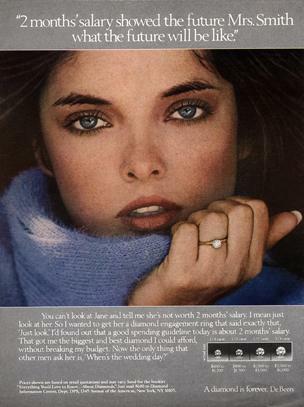 Where did the idea come from? Jewelry companies looking to sell product after The Great Depression. An article from the BBC does a great job breaking it down.

The Depression was a disaster for De Beers, which controlled 60% of rough diamond output. De Beers embarked on what it now describes as a "substantial" campaign, linking diamonds with engagement.

Prior to the 1930s, presenting a woman with a diamond engagement ring was not the norm. Even on the eve of World War Two, a mere 10% of engagement rings contained diamonds. By the end of the 20th Century, 80% did. In the 1930s, at the start of the De Beers campaign, a single month's salary was the suggested ring spend. In the 1980s in the US, it became two months. One advert featured a pouting woman, a scarf, a finger, a diamond ring and the words: "Two months' salary showed the future Mrs Smith what the future would be like."

Another did away with the woman, the pout and the finger, leaving only a diamond ring against a black background and the question: "How can you make two months' salary last forever?"

As well as establishing the salary calculation, years of De Beers marketing inextricably linked the diamond to the concept of an engagement ring.

The real breakthrough was created by a team at the advertising firm NW Ayer and Son. The tagline "A Diamond is Forever" was written in 1947 by Frances Gerety. The slogan worked.

So how much should you actually spend?